One of the secrets behind how we create great aviation products for pilots is this: many of us are pilots ourselves! While only 0.5% of the U.S. population has a pilot’s license, more than 5% of Appareo employees do. That’s 10 times the national average!

Collectively, our pilots log hundreds of flight hours in their free time. Let us introduce you to one now: Nicholas Butts, Research Staff Engineer Nick and a Civil Air Patrol cadet after the cadet’s first orientation flight.

Nick joined Appareo in 2010 as a Senior Embedded Software Engineer. A few years later he took on a new role of Embedded Systems Architect, before moving into his current role as Staff Research Engineer in Appareo’s Department of Demystification. Outside of Appareo, Nick also serves as squadron commander for the ND046 Civil Air Patrol squadron in Fargo.

What motivated you to pursue your pilot’s license and how long have you been flying?

Both of my parents have their pilot’s licenses. My dad did a lot of flying in the 70’s and 80’s and I remember flying with him as a kid. Growing up I had hopes of flying in the Air Force, but my vision was not good enough to fly. So as I grew older my hopes of flying for the Air Force diminished and was replaced by other interests. In high school, I was more interested in tinkering with electronics and computers. My parents, being concerned that I might not graduate from high school, made me a deal. If I got a 3.5 GPA in my senior year of high school, they would pay for my pilot’s license. That was the motivation I needed to study and do my homework. I ended my senior year with a 3.48 GPA, so my parents said they would pay for 50% of my pilot’s license. That summer I started flying with the local town dentist (my flight instructor) and completed about half of my training. The next summer I finished my pilot’s license. 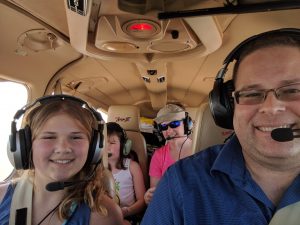 What was your proudest moment as a pilot?

How does being a pilot help your work at Appareo?

It really helped with Stratus 1 and Stratus 2. I understand how pilots would use the product and what features pilots would value.